The Internet protocol suite is the computer networking model used on the Internet. It is also known as the TCP/IP model, because TCP and IP were the first networking protocols defined during its development.

There are four layers which provide end-to-end data communication and are used to specify how data is packetized, addressed, transmitted, routed and received. The layers from lowest to highest are: link layer, internet layer, transport layer, application layer.

The link layer is responsible for transferring datagrams between hosts that are connected in the same link: Ethernet, Wi-Fi, DSL, etc.

The link layer may provide the following services:

The following protocols is a small portion of the protocols that operate on this layer:

Assuming that both nodes are in the same network, the sending node will build an ARP packet containing several information, most importantly the IP address of the destination host. Then it broadcasts this packet and each network adapter will receive it and check if it is the wanted host. If that’s the case, it will send an ARP reply containing its MAC address. After receiving this ARP reply, the sending node can then properly build the link-layer frame and send it. The MAC address is also stored in a cache table mapping IP addresses and MAC addresses, so it can be used for a period (defined with a TTL) without the need to send an ARP request every time the host wants to contact another host in the same network.

For hosts in different networks, the datagram is first sent to the network router, using ARP to find the router’s MAC, then the router noticing the datagram involves a different network will construct a new frame and move from one network to another. Then in the new network, ARP will be also used to find the correct MAC address and finally send it to the correct host.

The internet layer (or network layer), does the communication between hosts in different networks.

IP (Internet Protocol) is the most well known protocol that operate in this layer. It does not provide reliable transmission, it works in a “best effort” delivery scheme.

IP has two versions: IPv4 and IPv6. The main reason for a new version was the exhaustion of IP addresses in IPv4. IPv4 uses as 4-byte address which gives a total of 232 addresses which were exhausted in 2011. IPv6 uses a 128-bit address, allowing 2128 addresses. Both versions have more differences besides a larger addressing space, but these characteristics are not discussed here. They are also not interoperable. The rest of this section will focus on IPv4.

IPv4 uses 4-byte addresses, usually written in the dot-decimal notation: 172.164.1.10. Some of these addresses are reserved for special purposes such as:

Since the Internet Protocol allows communication between different networks, it must have a way to accommodate the differences between these networks, more specifically the maximum transmission unit (MTU). When a network wants to transmit datagrams to another network with a smaller MTU, the sending network may fragment its datagrams. In IPv4, this task is done by routers, while in IPv6 the hosts are responsible for determining the path MTU before sending datagrams.

When a router receives a packet, it analyzes the outgoing interface MTU. When the packet is bigger than the MTU, it fragments the packet in multiple packets of a smaller size before sending it. The datagrams have a flag to indicate that the packet is fragmented so the receiving end can detect it is a fragmented packet, then wait for all packets to arrive, and finally reassemble them in the correct order.

The transport layer has a critical role of providing communication services directly to the application processes running on different hosts. It may provide services such as connection-oriented data stream support, reliability, flow control and multiplexing.

The mechanism used by both TCP and UDP for this matter is by having a source port and a destination port to indicate the correct applications which the segment is related to. When a segment arrives, the transport layer examines the destination port to see which socket should receive the given segment. When an application wants to send a segment, the source port is properly set so a reply can be correctly addressed back to the sending application.

Ports 0 to 1023 are restricted. Some well known and restricted ports are:

The NAT mechanism explained in the previous layer uses dynamic port numbers to disambiguate the traffic coming from a public network.

The checksum field in the UDP datagram provides basic error detection such as altered bits because of noise in the links, or while stored in a router, as it moved from source to destination.

UDP is suitable for applications and protocols that can cope with the unreliability of the network layer. Some examples of usage are: DNS, NTP, media applications (voice, video, music, etc).

The Transmission Control Protocol (TCP) provides reliable, ordered, and error-checked delivery of a stream of octets between applications running on hosts communicating by an IP network.

TCP is a connection-oriented protocol, this means that before sending any data the two parties must first setup a connection between them, this is often called a handshake. The handshake procedure used in TCP is a three-way handshake where the client first sends a segment to the server, Flags = SYN; SeqNum = x, the server responds acknowledging and setting its own sequence number, Flags = SYN, ACK; AckNum = x + 1; SeqNum = y, and finally the client acknowledges the segment sent by the server, Flags = ACK; AckNum = y + 1. 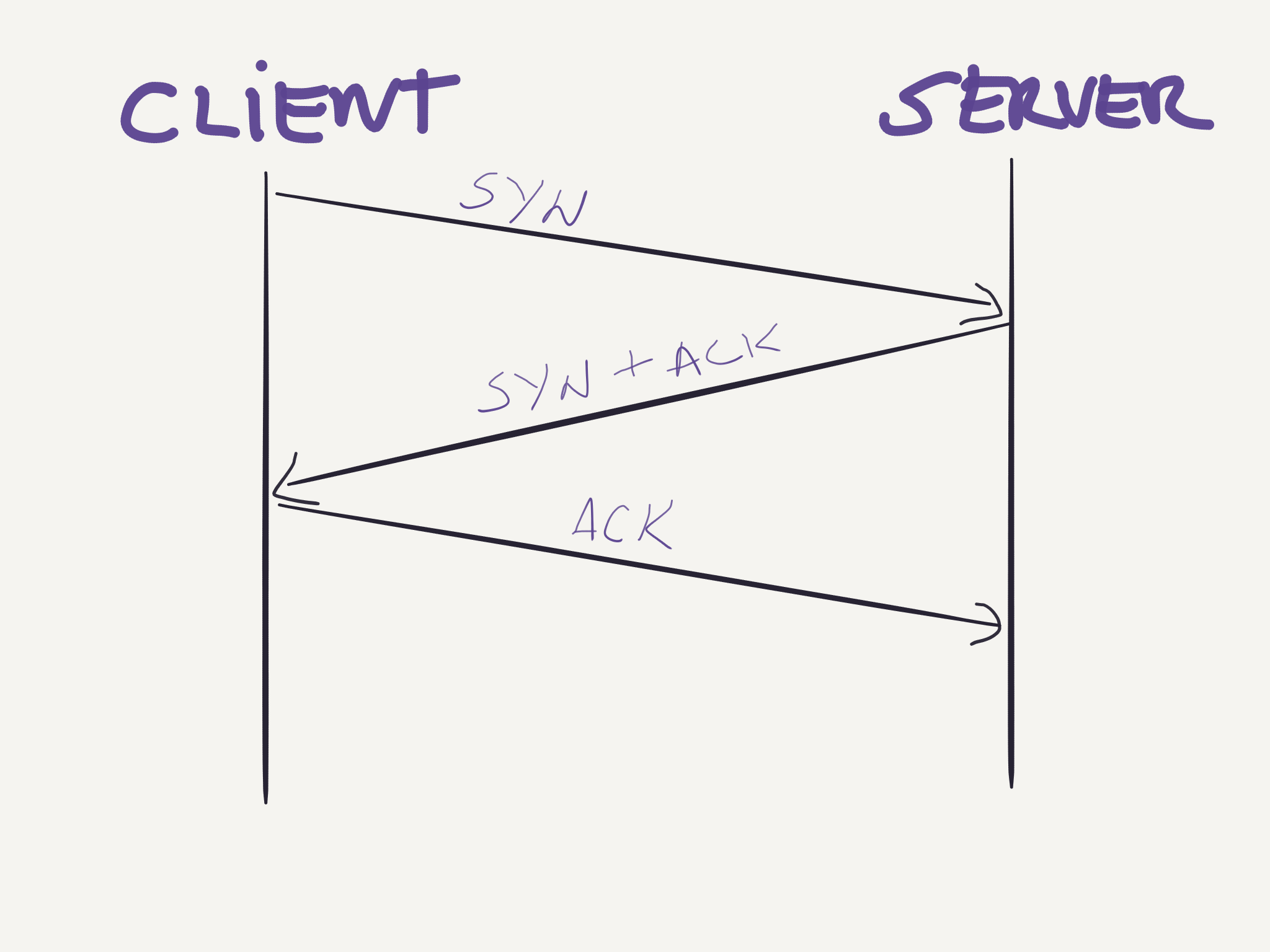 After setting up the connection, both ends can start sending data in form of segments as the image below shows: 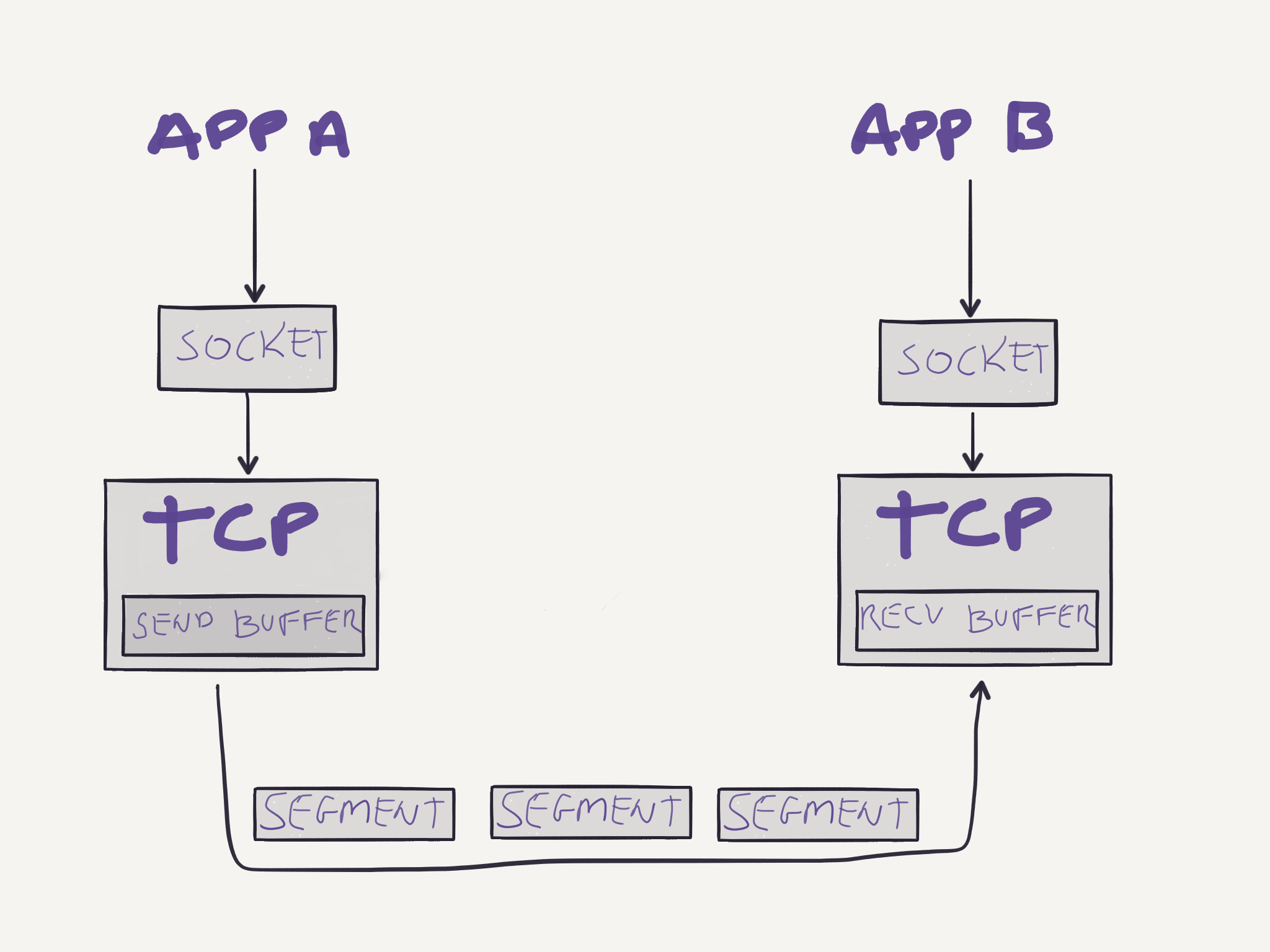 Note that since TCP is full-duplex, both parties will have a send and receive buffer, allowing data to flow in both directions. 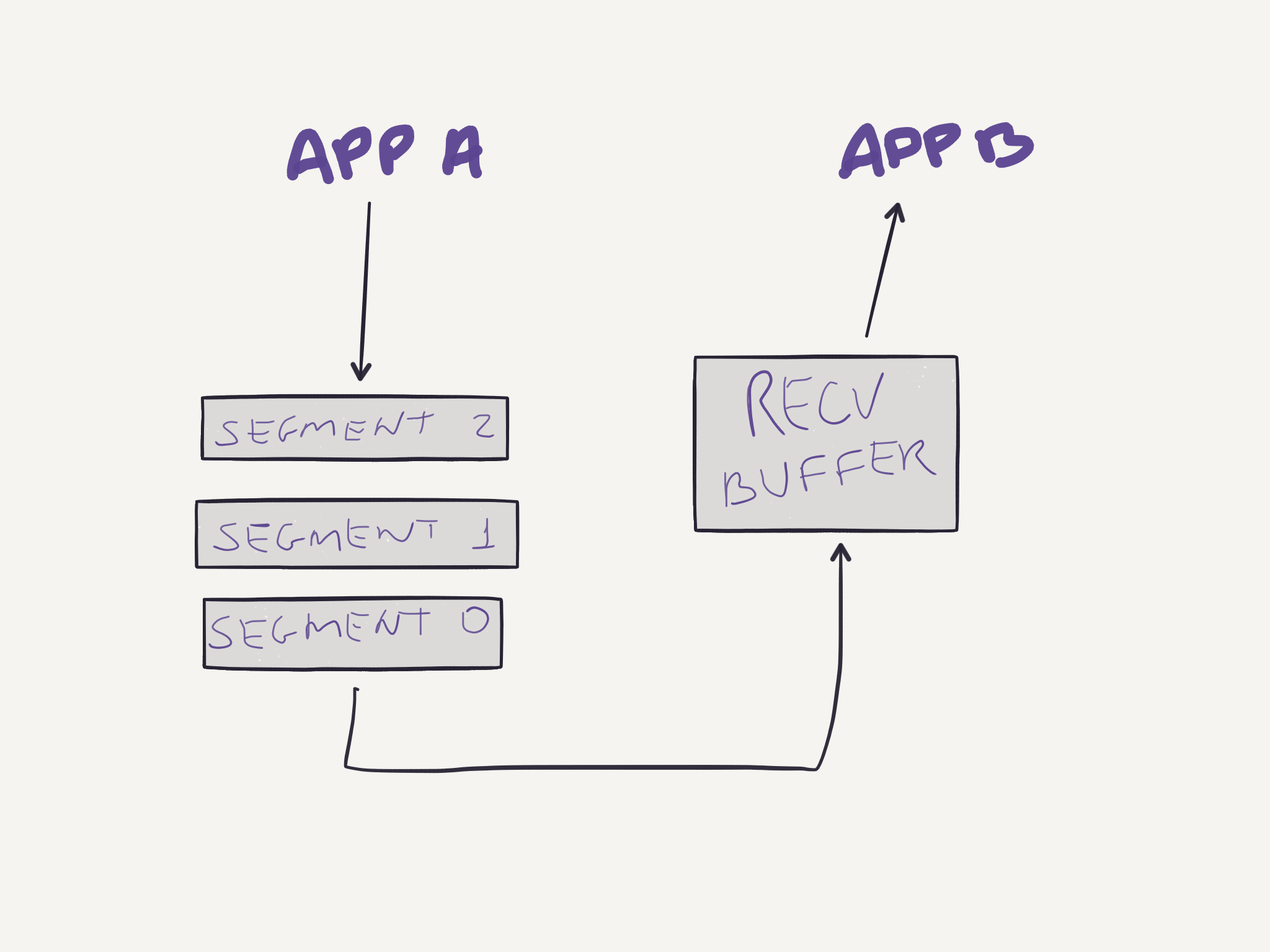 And the first segment is lost during the transmission: 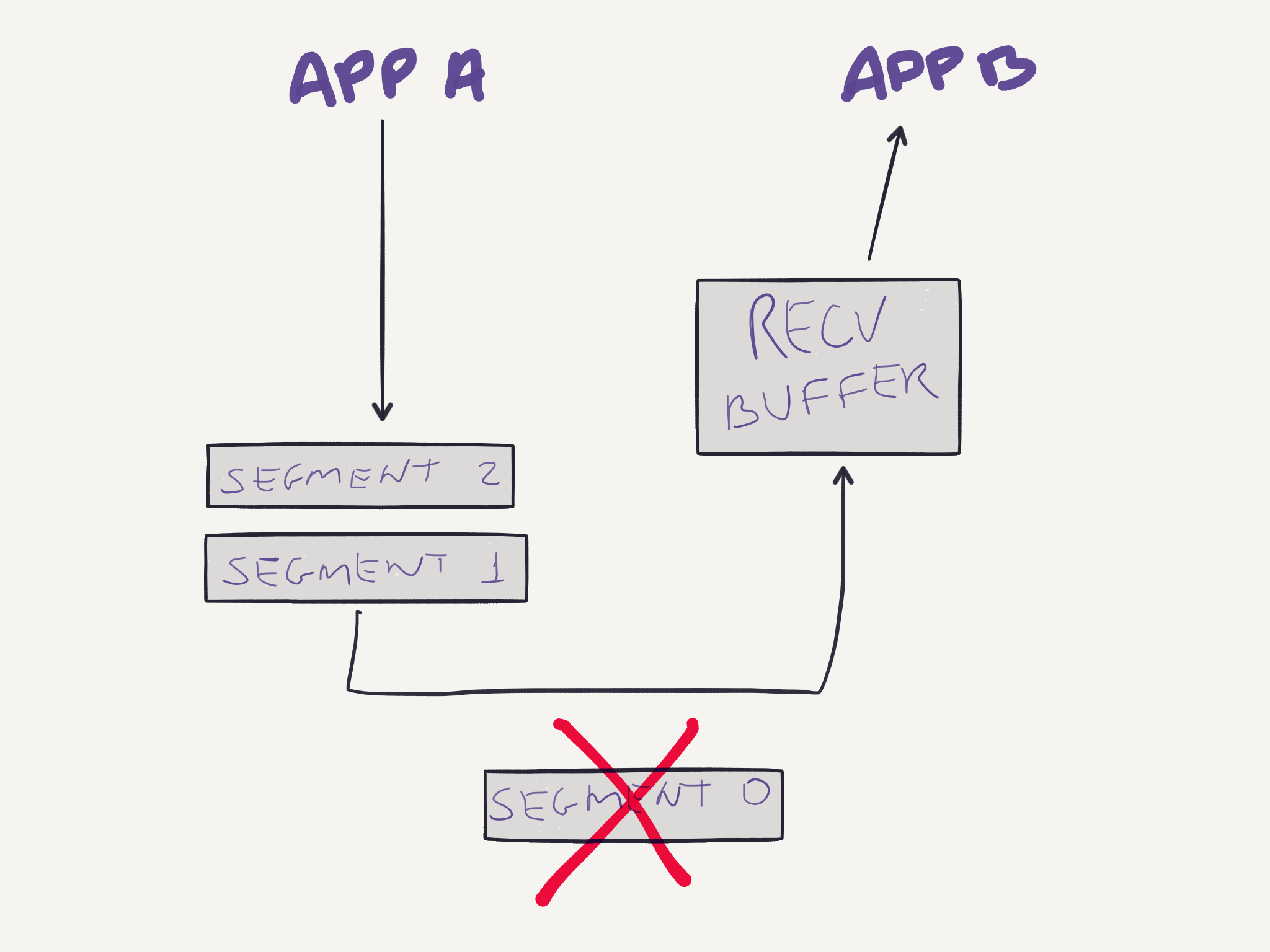 But the other two segments reach their destination. Then the receiving buffer will store these two segments while the first one is retransmitted: 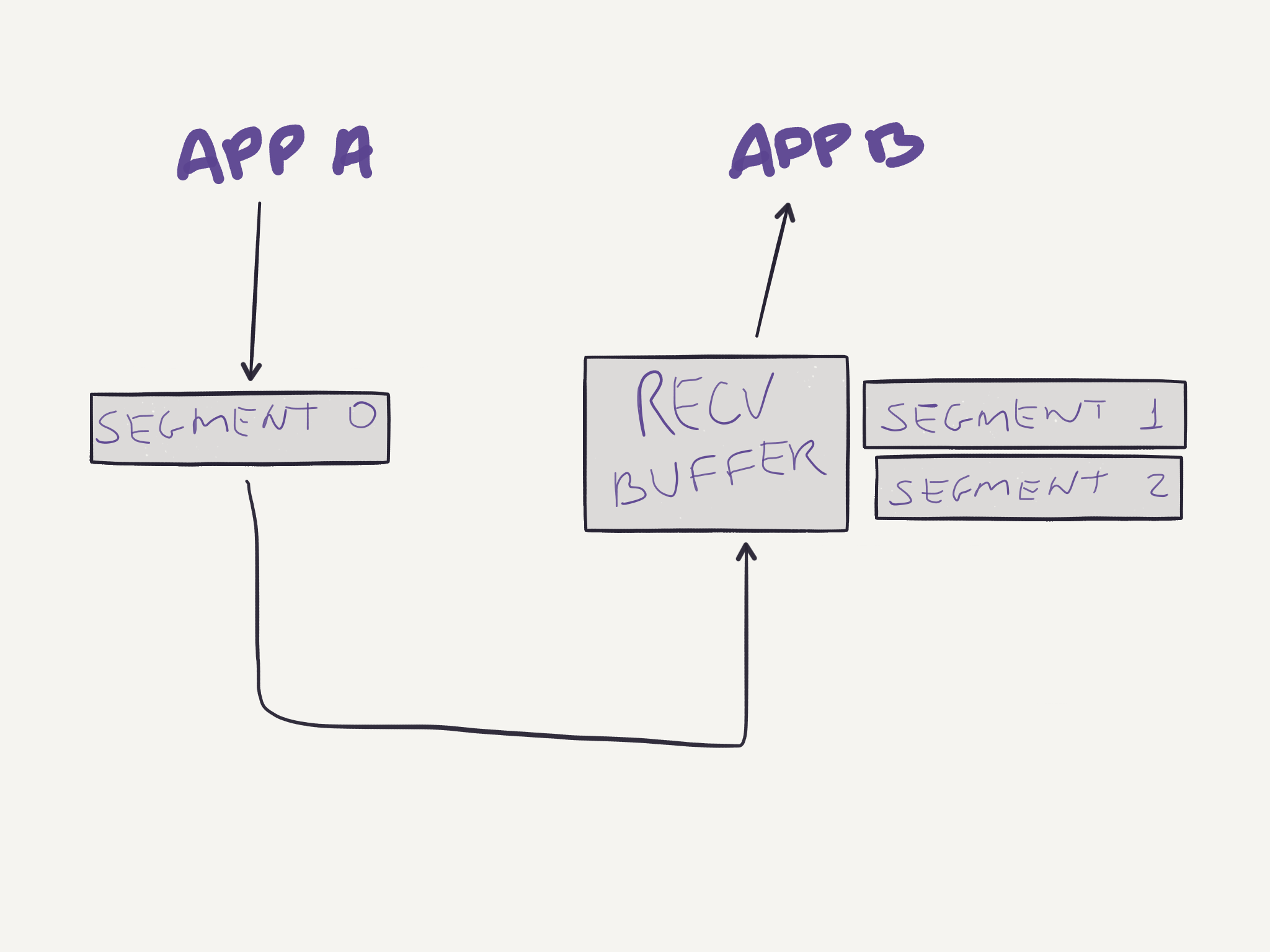 After all three segments are received, they are correctly reordered and delivered to the application: 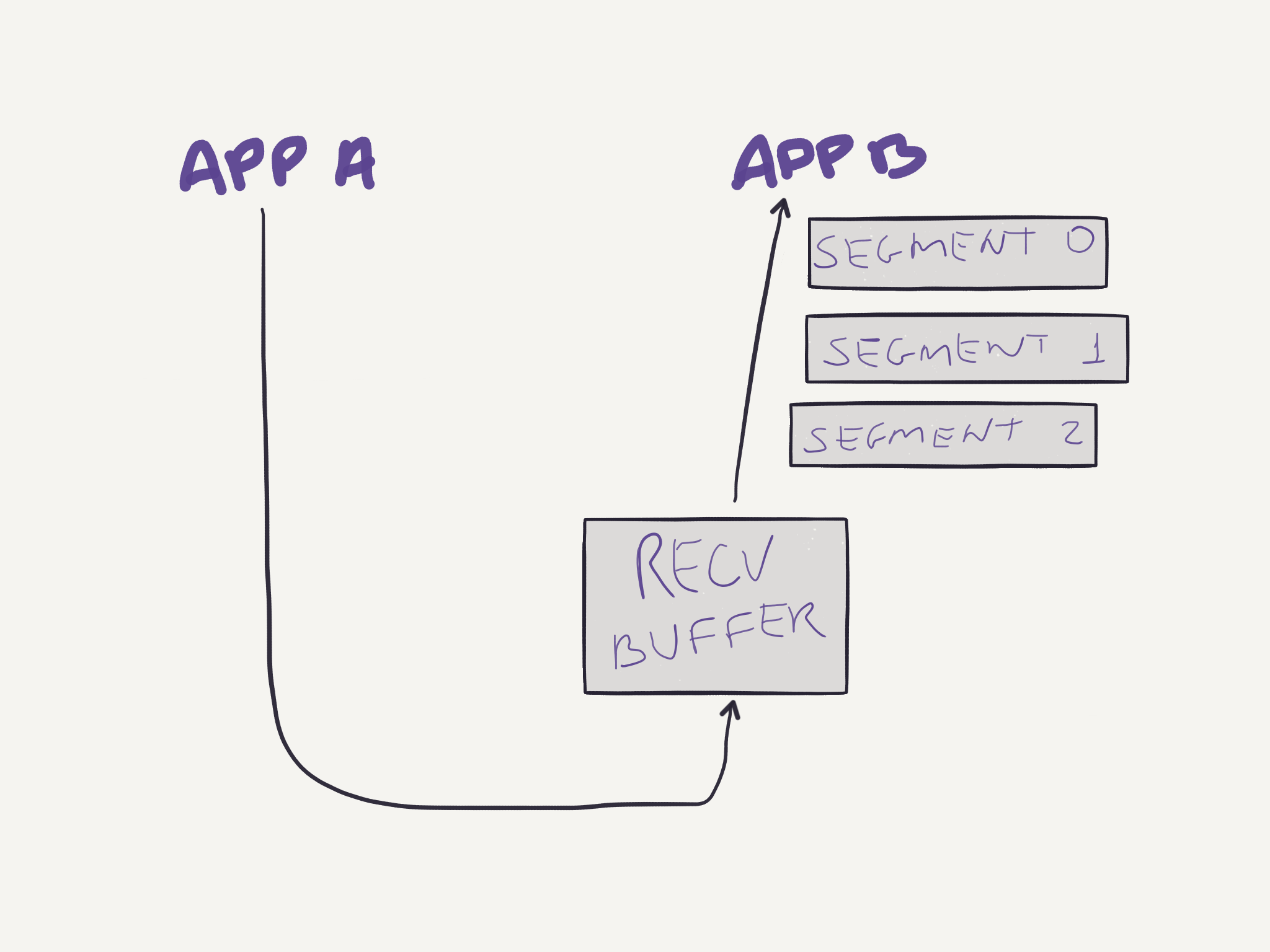 The receive buffer shown above is not only used when out of order segments arrive. In fact, correct and in-order segments are placed in the receiving buffer and stay there until the application reads data from this buffer. If the application is busy and not reading data from the buffer, and the sending buffer keeps sending data, it might overflow the receive buffer. To prevent that from happening, TCP provides a flow-control service. Each party informs the other how much free space it has on its receive buffer in the Window Size field in the segment. The parties maintain two variables to compute this value:

With those variables each party knows how much space it has available on its receive buffer: 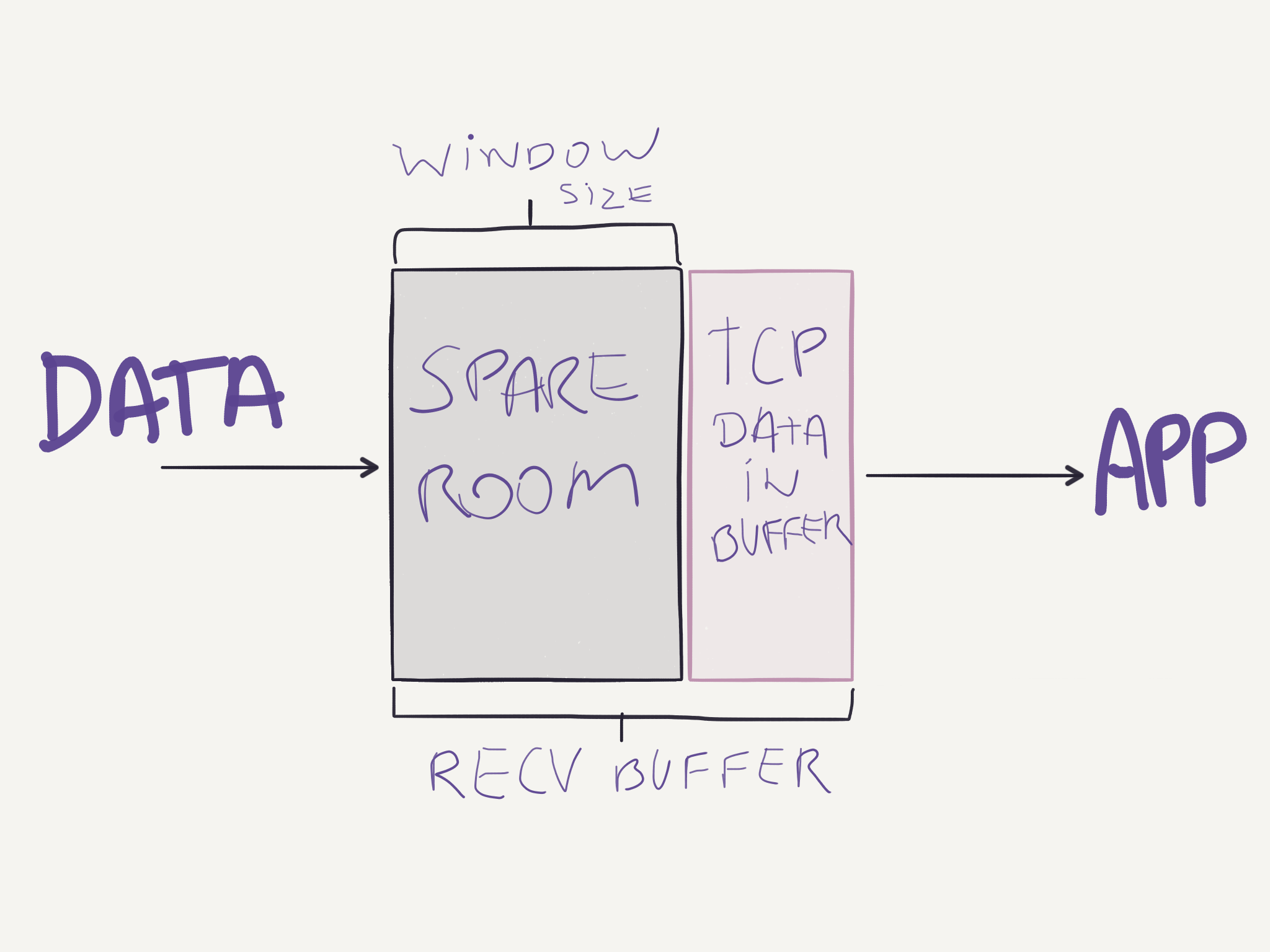 The sending party in question will also maintain variables to determine how much data it can send:

Throughout the connection’s life, the sender will guarantee that:

To prevent a fast sender from overwhelming a network, TCP uses different congestion-control algorithms. It starts with a slow start, then switches to congestion avoidance and whenever congestion is detected (via a dropped packet), it switches to fast recovery mode. To do this, the TCP module at the sender keeps track of a variable called CongestionWindow, which has the value of how much traffic the sender can send. Remember that before it was said that the sender would always try to maintain the following constraint of data sent to the receiver:

That’s not entirely true, though. Because TCP has the congestion-control mechanism, the sender actually maintains a different constraint:

The value of CongestionWindow is dynamic and changed differently depending on which congestion control algorithm is being used at the time. The different algorithms are: 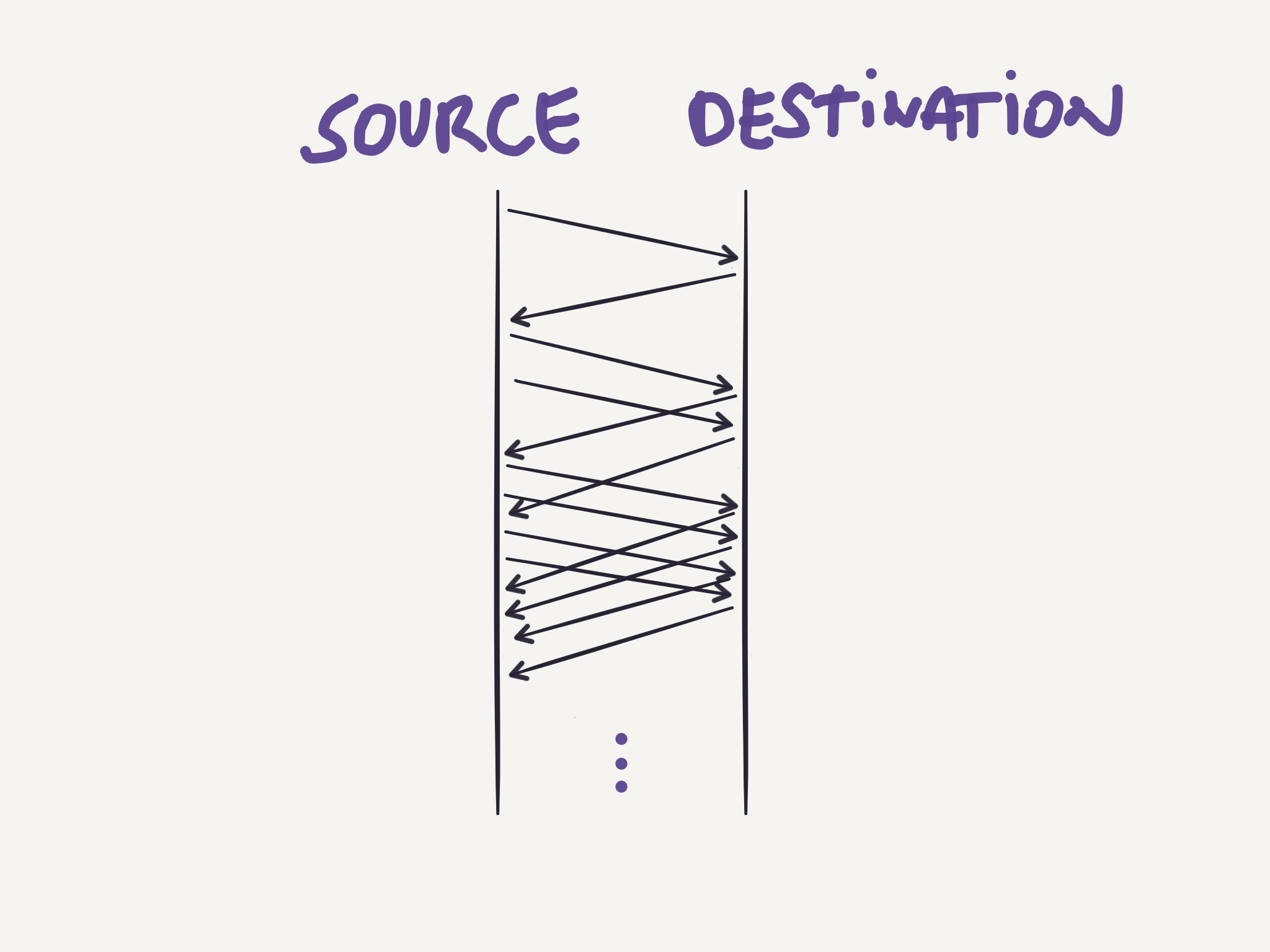 The process of doubling the number of segments to send clearly can’t continue forever, otherwise the network would be congested anyway at some point. A different algorithm is then used to change the rate of sending segments. In the congestion avoidance state, the rate grows linearly instead of exponentially as it happens in slow start mode.

In congestion avoidance mode, the sender increases its CongestionWindow to a fraction of MSS:

Fast recovery is a different algorithm also used for TCP congestion-control. Instead of waiting for a timeout to happen when a given segment is lost, the sender can detect early that something is not right when it receives duplicate ACKs. Then it can send the missing segment “early” in an attempt to avoid a timeout and getting back to the slow start state.

The receiver sends an ACK for each segment it receives. If it receives an out of order segment it will send an ACK for the last in order segment that was received. If the sender receives multiple ACKs for the same segment, it is reasonable to suspect that the segment was lost. For example, imagine the sender sends four segments, and the first is lost, the receiver will send ACKs for the previously acknowledged segment while keeping the newer segments in buffer until it receives the missing segment and reorder all of them. 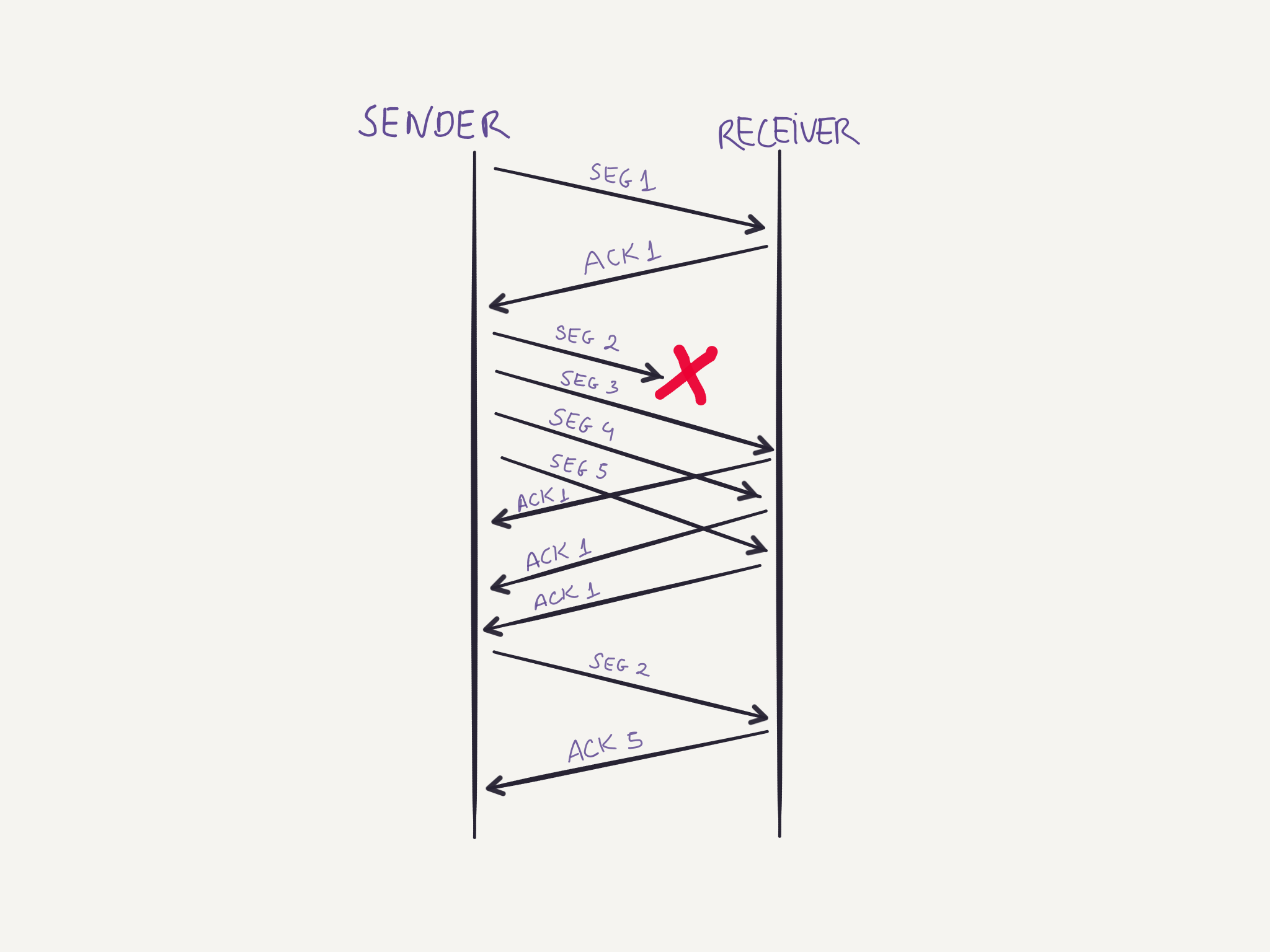 Either side can start the process of terminating the connection. A four-way handshake is used for the process. The side wanting to terminate the connection sends a FIN segment, and enters a FIN_WAIT_1 state waiting for an ACK from the other side. After receiving this ACK it enters the FIN_WAIT_2 state and waits for a FIN segment from the other side, when that segment arrives, it sends an ACK and waits for a while in case the ACK needs to be retransmitted. After this time, the connection is formally closed and the resources are released. 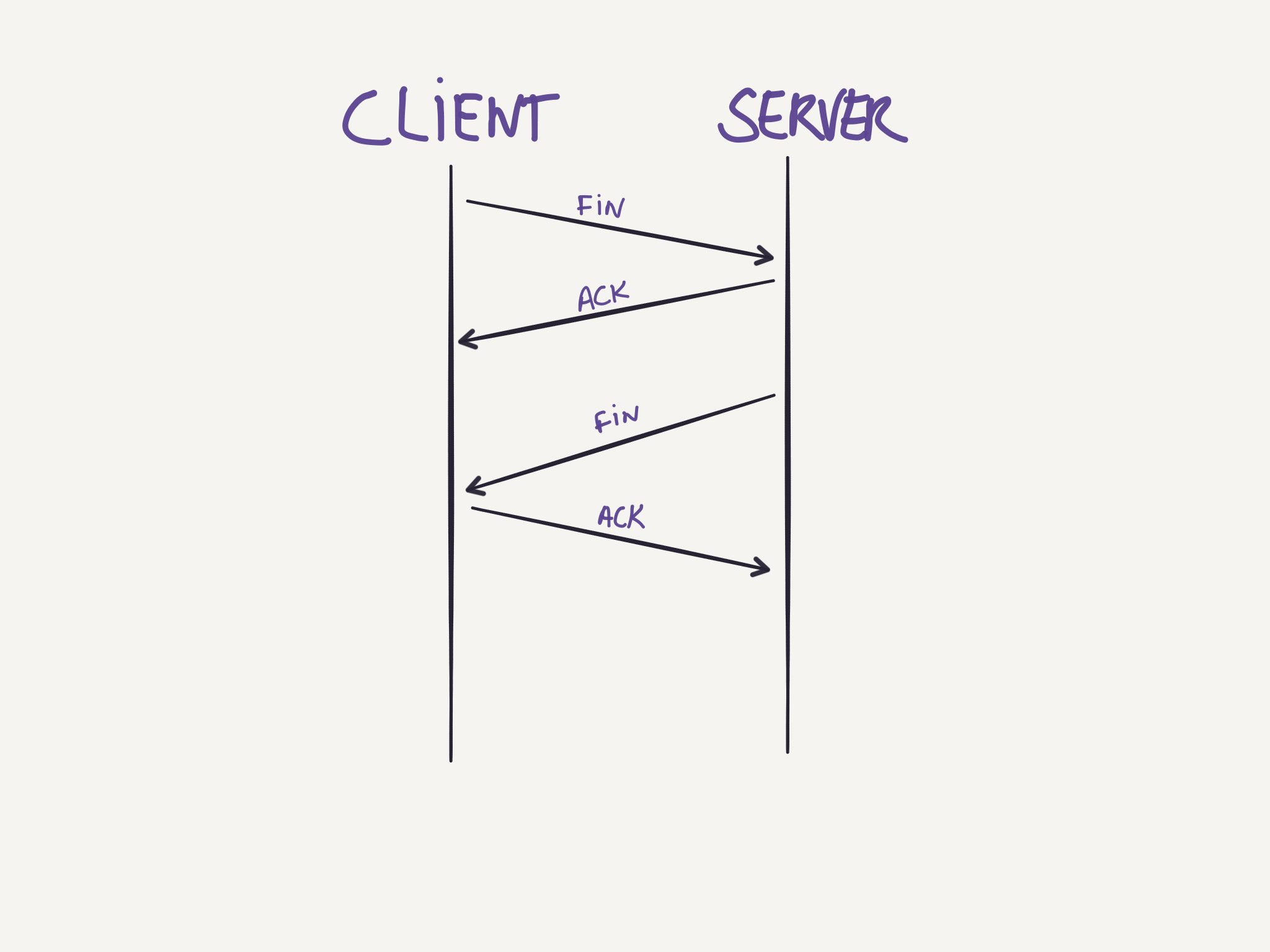 The protocols in the application layer provide some specific service between application process in different machines and specify how these processes communicate between them. These protocols define aspects such as:

Transport Layer Security (TLS) and its predecessor, Secure Sockets Layer (SSL), are cryptographic protocols that provide a secure communication over a computer network. Connections running over TLS will have one or more of the following properties:

Another interesting characteristic that may be provided depending on the configuration used for TLS, is a property called forward secrecy which means that if the encryption keys are disclosed in the future, it will not be possible to decrypt TLS communications that happened in the past.

To setup the TLS connection the parties exchange messages, using a handshake procedure, to agree on some aspects of the connection:

Once the steps above complete successfully, both parties can securely start sending data between them using the session key generated in the process. 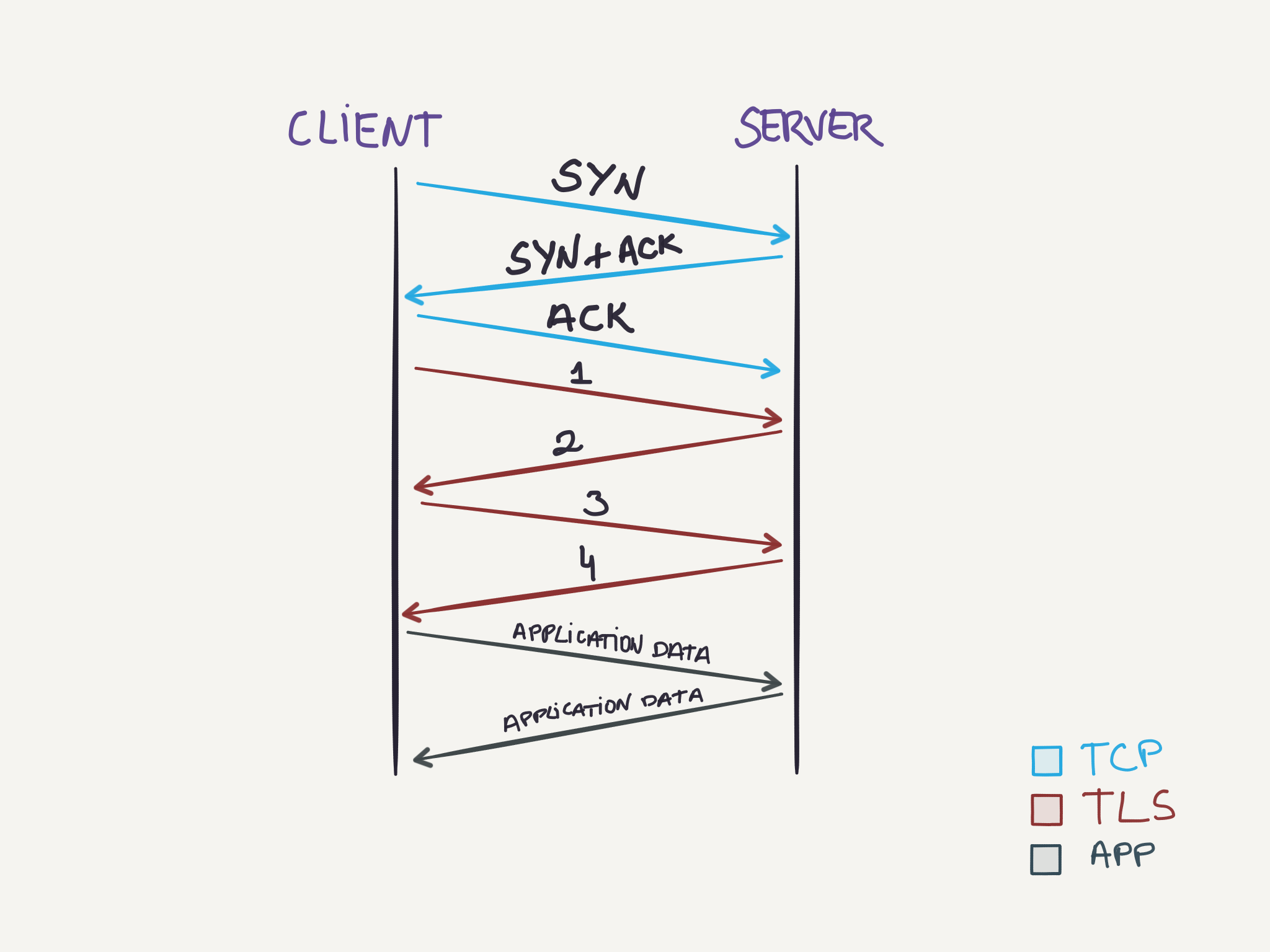 This text will not go over details about optimizations that are available for TLS. Beware that the client could start sending the TLS request together with the ACK from the TCP connection, and the TLS handshake can be abbreviated as well in case both parties have previously met.

For applications using TLS the process above is completely transparent to them. Usually, they will only deal with unencrypted data, as the task of encrypting/decrypting the data, and also setting up the TLS connection, is handled by the TLS layer.

An interesting TLS extension is SNI (Server Name Indication). This extension is used when a single machine hosts different applications and each application has its own TLS certificate. To be able to correctly setup and use the correct certificate, the client can indicate which hostname it is willing to talk to and then the server will see this value and choose the appropriate certificate to proceed with the TLS handshake.